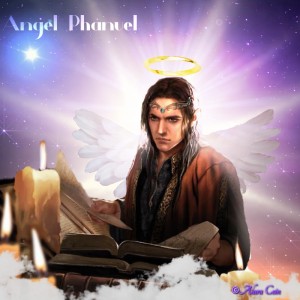 Angel Phanuel is the Angel of Judgement, he sounds the trumpets, a shift of energy to oppose the agenda of the world, its spiritual powers, and corrupted leaders. He has been responsible for writing down history, and false prophets involved in false teachings since the fall, and rebellions. Every name, good and bad is written in the book of life.  He spoke with me, and left a message about these things Message from Phanuel and I kept record of this divine encounter for all to see as he instructed.  In this he explains the agenda, or some of it anyhow, when it pertains to false teachings and prophets. But in this article, let us find out who Phanuel is, and leave to his message for later.

Phanuel is the angel of judgement and of keeping record of his judgments in the Book of life. His name means “Vision of God” and he is an Ophanim angel responsible for delivering messages of judgment or exposing falsehoods. This is why he carries his name, and with great loyalty to its purpose too. He reveals the “vision of God” as it is revealed to him, for others to see the truth and beyond. He does not put up with deceit, nor does he put up with marauders of lies. He is about the truth, and the truth only.  Phanuel rules a legion of 4000 angels that he uses sometimes, to take his messages for him, to people who may not have the vibration high enough to meet with him directly. He always finds a way for his message to be delivered. Sometimes he uses fairies to do so too. Inspiring powerful psychics to channel the message from their realm. He works on the number vibration of 5. 5 speaks of  learning and teaching from direct experiences. This is how earthly prophets are built. They go through their experiences in each life, and then add and collect the wisdom. In the life appointed for them to deliver the gathered message from experience, they go on to preach it. It also speaks of health, spiritual expansion into truth, first stage of ascension,being more grounded in the world,  and challenges faced that bring in lessons learned from  your experiences.  Perfect for Phaneul’s message because he delivers motivation for change, and telepathic communication as indicated in my article. 5 has more to it of course, but this is the part of the vibration that resonates with Phanuel.

Phanuel has sounded his trumpet already. The others too. With only 2 left, the time is quickly approaching for worldly changes. He appears in many ways, but as I have seen him has been in an orb of light that is pale red light with an outer pale yellow layer,bright white in the center… and close to the likeness in the photo I rendered above. He actually has four wings though, and they are white and yellow in light tone. He likes daytime hours, because he enjoys being outdoors during communication but can appear at anytime. He can be compared to the Hierophant Tarot Card, because he is the Judge, and he is the Leader.

He sticks to the Universal laws, and the traditions of heavens that were supposed to be delivered to Earth below. Phanuel also goes by the name, “Limat-Ash”. And he’ll appear as a dragon working with Mars energies under his Principality. He is a strong vibration of energy and does not stay to answer many questions, only to give his judgement, and then leave. Phanuel performs many roles in the heavens, as a scribe and record keeper, and as an angel working closely with another, in Judging the planets and realms. Phanuel is responsible for earth and in working against the complete and total domination of the Archons.